Pallet Wrap also known as stretch wrap or stretch film adheres to itself and can be applied by hand, by a pallet wrap dispenser or by machine wrap 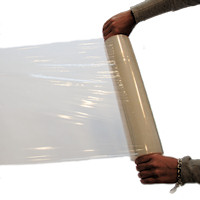