How to make a polythene bag

THE 4 STAGES OF MAKING A POLYTHENE BAG

Manufacturing polythene bags can be split into 4 stages -

Please use the glossary table table to look up any words or phrases contained within this text.
A list of technical abbreviations can be found here

Polyethylene (PE) - the correct name for 'polythene', which is the trade name given to the material first commercially produced by ICI in the 1930s, is a member of a family of materials called POLYMERS (from the Greek meaning many parts). Unlike most naturally occurring substance.s, these have long chains of repeating molecular units (known as monomers), which give them strength and other properties

The main ingredient in most plastics is polyolefins hydrocarbons, mainly crude oil or natural gas, which have one or more double bonds (ethylene [CH2=CH2] being the one). To simplify a complicated process: crude oil or natural gas is CRACKED into several useful components (including petrol and ethylene), ethlene ( a monomer) is then POLYMERISED using heat, pressure and catalysts, into polyethylene in large chemical plants, using a variety of processes developed by individuals and corporations over the years. 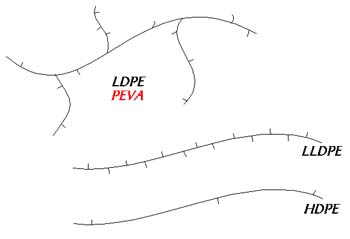 To make it suitable for processing into something useful, the molten material is forced (extruded) through a plate containing many small holes (the die), so that it forms continuous strands like spaghetti, which are then cooled and chopped into small pieces, known as granules, which are then conveyed into silos for subsequent transport to the processing factories in bulk tankers or sacks

For us, the first stage is to make polythene film. We take the granules, blend them with colouring agents (known as Masterbatch) and other additives if required. This mixture of cold granules is then conveyed to a film extruding machine, in which the granules are heated until they are molten and again forced through a die - but in this case, of an annular shape (circular) with about a 1mm gap between the inner and outer parts of die, so a molten tube of polyethylene emerges vertically with a wall thickness of 1mm and a diameter the same as that of the die (typically 60-300mm) 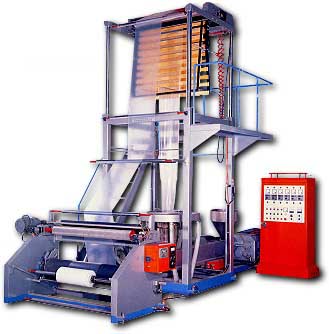 This molten tube has air pumped into it, so that it inflates like an elongated balloon. This stretches the tube outwards, whilst at the same time the tube is being pulled by a pair of nip rollers, which stretch it the other direction. This process is known as biaxial orientation, as it causes the molecular chains to orientate both crossways and lengthways, thus giving it strength

The tube is cooled by cold air blowing onto it; it emerges beyond the nip rollers, still as a flattened tube, but now of a much larger diameter and with a wall thickness of typically 10-100 micron (Mu = 1/1000th mm). this flattened tube (known as layflat tubing LFT) is then wound on to a cardboard or plastic tube (known as a core) 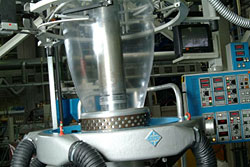 The finished rolls of film, typically 100kg each and of up to 10,000 metres (10km) in length of tube depending on its thickness, are removed for the next stage

If the bags are to be printed, the roll of film is taken to the printing machine known as a 'press'.  This is usually a flexographic printer, which means that it uses flexible printing plates which are mounted on to a steel cylinder of the correct diameter to give the repeat length required - the repeat length will subsequently determine the size of bag made

There are 2 main types of flexographic press - (a) stack type and (b) central impression.

To ensure the ink sticks to the film, which is, unlike paper, non-absorbent and smooth, the film is Corona Discharge treated. This device essentially bombards the surface of the film with high voltage sparks which indiscernibly roughen the film's surface

The level of treatment is critical and should normally be between 38-44 dynes (measure of surface resistivity). Once the rolls of film are printed, they are ready for the final stage in the bag making process

All standard bags and carriers have one side open and three sides closed. There are 2 main methods of making bags - sideways or lengthways

(a) Sideways - with this method, the bags are produced sideways-on by a machine using a hot knife to simultaneously cut and seal the tubular film to form the sides of the bag, the bottom being the fold in the tubular film. These are known as side-weld bags

One of our side weld machines

(b) Lengthways - using this method, the layflat tube is pulled through the machine and a hot wire makes a seal across the tube while a flying knife (a sharp blade traveling at great speed), cuts the film below the seal whilst the film is motionless for the sealing process. Thus the seal forms the bottom of the bag and the folds of the layflat tubing, the sides. These are known as bottom-weld (or end-seal) bags

There is a third method commonly used, usually for vest-carriers and heavy duty pouches, this is where the bags have a bottom-weld type seal at both ends, or both sides. This is known as mixed or skirt-weld (because it leaves a skirt below the seal). On vest carriers, a portion of the bag is then punched out to form the handles and opening section